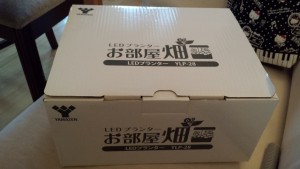 The Yamazen LED Planter is a commercially sold kit for hydroponic growing, and it was my introduction to hydroponics.  It combines ideas from floating raft systems as well as non-circulating hydroponics. 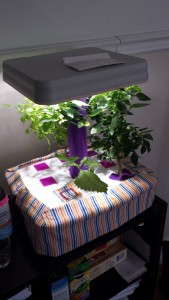 Sponges are used for grow media and they friction fit into the holes in the float, with the bottom of the sponge suspended about an inch above the water.  Since sponges drain water and dry out quickly, a strip of felt is inserted into each sponge and hangs in the water, wicking moisture upwards so that the sponge is continually moist. 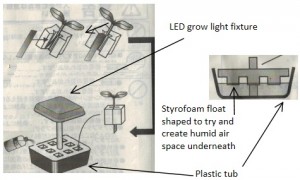 It really is a cool design, though not without its oversights.  Firstly, it’s an algae breeding ground waiting to happen because the water isn’t lightproofed.  Secondly, the air zone under the raft is supposed to be a very humid zone and it isn’t trapping humidity as well as it could be.  Thirdly, the sponge is friction fit (meaning the only thing holding it in place is the fact that it’s the perfect size for the hole) and the fit becomes looser over time since plant roots begin to compact the sponge inwards, shrinking it so that it falls through the hole and into the water.