Last night I was grocery shopping and noticed that my Metro sells hydroponically grown lettuce.  Not just that, but lettuce that still has all its roots and is sitting in either water or a nutrient solution in order to stay alive until it is purchased.  Now, I’ve tried and failed several times at getting lettuce seeds to germinate and grow in my little Yamazen hydroponic system, so at $2.50 I decided to buy a head and see if I could plug it into my hydro system and get it to keep growing.

Now, every so often articles proclaiming ‘Grow vegetables from kitchen scraps!’ make the rounds and float through my Facebook feed.  You use the top of a green onion or certain other vegetable, then you suspend the remaining bit in water and voila, it begins to grow again.  Of course, this isn’t a long term plan.  The lack of a nutrient source will catch up with the plant eventually (probably sooner rather than later), and it can use the energy within itself to make a last ditch effort at creating roots but the fact that you’ve cut and used most of the plant means it has that much less of its own energy that it can sacrifice in this way.  In this case, though, the plant still has viable-looking roots attached and I already have a setup with a nutrient solution and grow light, so this has the potential to actually work really well.

First, taking a good look at the plant, it was hydroponically grown but was started in a soil medium.  Normally I just use sponges as a growing medium, so I wanted to clean a bit of the surface dirt off, and ideally wrap something around that part of the roots so that they are partially protected from the air.  I put a couple inches of water in a plastic tub, gave the roots a rinse, and used a paintbrush from the dollar store to gently brush off some dirt. 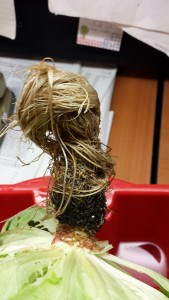 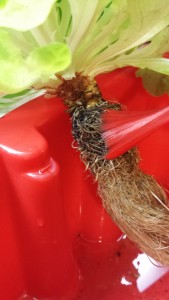 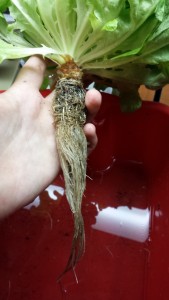 Next, I put the lettuce into an isolated container of nutrient solution so the roots can kind of rinse themselves before I move it into the bigger system.  Originally I intended this as a sort of ‘quarantine’ to make sure it wouldn’t introduce disease into my system, but I ended up only keeping it in this container for about 12 hours before moving it to the proper system.  The picture on the left is my Yamazen LED Planter, and the picture on the right shows the lettuce, my nutrient solutions, a measuring cup of water, and a shot glass that I’ve marked for measuring.  The nutrient solution is in two parts, A and B.  Since it’s so potent (2 cups of water require only 0.5mL each of solutions A and B), it’s hard to measure precisely when you need small quantities.  To make it easier to measure, I keep two water jugs filled with 10% solutions of A and B respectively and I adjust the amounts used accordingly. 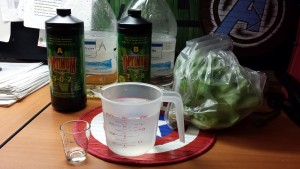 Solution mixed, in goes the lettuce.  I didn’t need anything to suspend it at the right height since the width of the plant held it above the lip naturally.  The second picture below is what it looked like after about 12 hours. 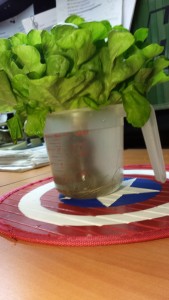 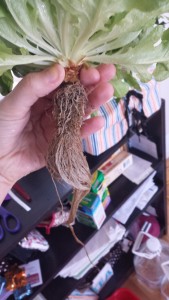 Finally, I lowered the root plug into my system.  Part of the reason I thought to try this was that I noticed that the root plug was pretty much exactly the size of the holes in the Yamazen’s styrofoam float.  I really should find some breathable artificial material to wrap around the part of the roots that sits above the water, but for now this will do.  There she is in her new home, hopefully she’ll thrive there! 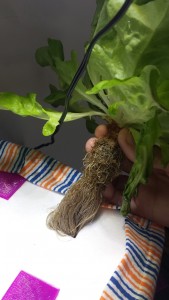 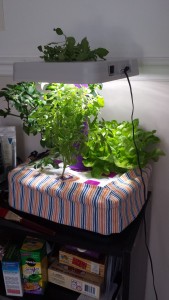